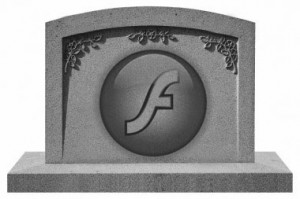 For years Adobe defensively backed Flash’s true place at the head of the mobile device dinner table. Today Adobe had a reality check and announced that it’s throwing in the towel with its mobile version of Flash. Moving forward Adobe will focus its attention on Adobe AIR and HTML5.

This shouldn’t really come as a surprise. Flash has been plagued with performance and reliability issues for awhile now. Pretty much every day there’s a new update for my Flash player. When it comes to mobile devices, Flash hasn’t really been popular with the cool kids crowd.

Steve Jobs was always dead set against Flash, and made it very clear last spring. It’s no surprise Flash never found a home on iOS devices. Then Microsoft unveiled its plans for Windows 8, complete with an ambitious mobile focus—including no support for plug-ins.  I think that was the final nail in the coffin for Flash.

HTML5 has been the clear winner for years. It’s been widely adopted by all key player mobile devices. This has been largely due to the fact HTML5 is a universal platform and not tied to one specific vendor.

Flash is tied to Adobe, so Adobe controls it. It’s hard to move forward with the web that way. The result? If you’re developing content and you want everyone to see it—whether on a desktop, smartphone or tablet—you use HTML5, not Flash.

With technology trends pointing to a more mobile world, I think this was the right move for Adobe. Content should be viewable on all devices. There should be no reason I can’t see content when browsing the web on my iPad because Flash isn’t supported.

With Adobe conceding to HTML5 and putting its efforts into supporting the ‘preferred standard’, the little blue lego blocks will soon be a thing of the past. If you are an iOS user, you’ll know what that means.