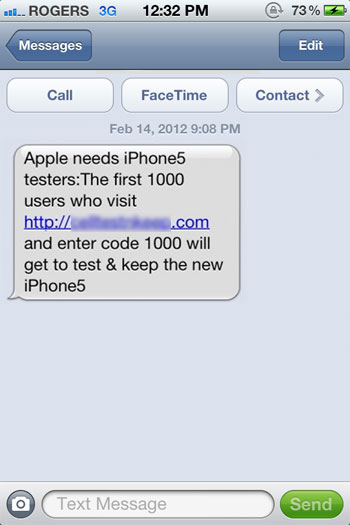 It was only a matter of time before cell phones became a way for scammers to hit you. That day is here! What better way to ring in the cell phone scam era than a scam about a cell phone—an iPhone 5 of all things. Is nothing sacred anymore?

The internet is a buzz with people reporting they’ve got text messages from Apple.  The message reads:

I get spam messages from my cell carrier all of the time, so seeing something like this at first wouldn’t make me think “scam” right off the bat. The fact it’s about an iPhone may even make me consider it for a second—but only a second.

Love can blind people to fall for scams, but to a fanatical Apple fanboy the thought of being one step ahead of everyone else with the latest model is a dream come true! But that’s exactly the point. This is too good to be true. It’s a scam.

The scam even uses a “for the first 1000 users who visit…” bit get you to act before you have time to think. It’s clever, and to some people it may have just worked. Don’t make an oops.

In situations like this just stop, take a deep breath, and allow your brain to kick in. Aside from the obvious warning bells, just think:

1.  It’s way too early. The next iPad hasn’t even been announced yet!  Since the 4S was launched towards the end of last year, the 5 won’t be appearing until that time anyways. That’s months away.

2. Apple likes to surprise the public with new models. There wouldn’t be hundreds of iPhone 5 rumors if they were caddy about details all the time. Why would they trust you to test the phone? If Apple really wanted the world to know the specs of the upcoming phone they have enough employees that can easily take the phone out to a bar and lose it.

Just have patience and wait until the fall like the rest of us to find out about the iPhone 5. Or just wait long enough for an Apple employee to take one drinking again. It’s happened two years in a row—third time’s a charm!