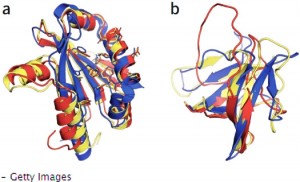 If you haven’t already heard this story, get ready to be amazed. The world’s biggest and brightest minds have been trying to solve the mystery of AIDS for over 15 years. After coming up dead-ended over and over, what did they do? Took one of the milestone problems and made a game out of it. The result? After Foldit was released into the wild, gamers solved the problem in 10 days.

For all of you sci-fi fans out there, this might sound familiar. Yes, this is how the TV series Stargate Universe begins. Instead of solving the mystery of the ninth chevron to unlock an intergalactic portal, gamers solved the mystery of the crystal structure of a protein that causes AIDS in rhesus monkeys. So kind of the same thing! Looks like reality TV isn’t limited to Survivor anymore.

Over 236,000 people joined in the puzzle solving fun. The crazy part is it didn’t take rocket science to solve. Foldit required no biochemistry experience to play. It’s a game. Proteins are crazy and can be folded an infinite number of shapes. All you have to do is tweak, freeze, wiggle or shake on-screen protein shapes. Find the best one and you win. Easy as pie!

There are many kinds of gamers. Some like points, others like coins. Some just like to whiz through the game, others take their time to find every secret. All scientists did in this case was appeal to the masses. They took the protein problem, assigned points to various solutions, posted the scores for other players to see and you’ve got yourself a competition. A recipe for success—gamers rejoice!

This result is a great victory for both medical and gaming communities around the world. Scientists are one step closer to curing AIDS. Gamers get bragging rights on being more than just mom’s basement dwelling D&D players. Just like your local IT team, they too are saving the world. Bravo!