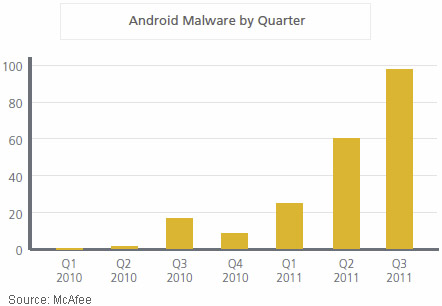 Android has been making headlines a lot lately. Have you noticed? Some of the news has been good—Android phones were the top selling mobile devices last quarter. But you can’t have fame without some costs. In Android’s case the bad news is that it also tops the charts for mobile malware.

Reports about the malware gong show targeting Google’s OS have been popping up a lot. The latest comes from McAfee in their Third-Quarter Threats Report. It notes that Android malware was up 37% from the quarter before. Even worse is that almost all of the mobile malware created last quarter solely targeted the Android OS. Time to switch to an iPhone!

This isn’t new info though. Android has always held top spot for malware. Now it just holds the number 1 spot by a lot. Cybercriminals aim for where they can cause the most damage. As more and more people choose Android devices, more and more malware will get created for the OS.

It’s also a lot easier to create malware for Android. Google’s policies for its app stores is very open door—there’s no code signing present and there’s no real review process for its apps. You submit your app and poof it’s out! The hoops Apple makes developers jump through ensure you get safe apps—albeit a much lengthier process for apps to appear in the App Store.

Popular Android malware records and sends your phone calls back to the hacker. Or Trojans that hijack your phone to send out SMS messages to premium numbers. You get charged, the hacker profits. The first QR code hijack installed malware like this.

Our phones are perfect targets for hackers. We do everything with them! Just think of all of the personal data we stored. Android phones can even be used as your wallet. That makes the threat of malware even scarier. With mobile sales heating up this year and going bigger in 2012, things are only going to get worse.

McAfee had thoughts 70 million unique malware samples would be recorded by the end of this year. That got bumped up to 75 million. How many do you think will appear next year? Should we be worried?