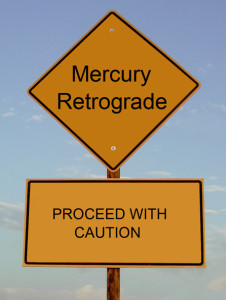 It’s that time of year again! Ever have those days that nothing seems to go right? Slow computers, always dropping things, every time you pull your headphones out of your pocket to find they’ve somehow magically tied themselves into a knot that even boy scouts would marvel at? In times like these you think the universe is literally out to get you! Well, when it’s Mercury Retrograde, it kind of is.

According to astrological mythology, Mercury is the head honcho of all that is communication and transportation. She’s an emotional bitch too. When she goes into retrograde mode, she gets all sorts of bassackwards crazy. A mastermind you wouldn’t want to deal with when she’s right in the head, you definitely don’t want to deal with her when it’s “her time of the year”.

Sometimes during the event people run into others from their past. What could be wrong with that? In some cases, sure, why not? Blasts from the past can be all sorts of fun! Other times, not so much. Basically this is a time of year when even the best of made plans can go all sorts of bat shit cray cray (much like all of 2013 has been so far). Expect the unexpected? Ya, you can expect that—all the time!

Say hello to missed appointments, unresponsive computers, lost wallets, and “why doesn’t this work?!” freak outs. This is not a time to make any sort of serious decisions either. Why? It’s kind of like living in opposite world. You might rock a situation only to find out that you really did not. Or maybe you totally bombed at something and get claps and standing ovations, becoming the new fan favorite while some people think that the world has gone mad.

It all starts February 23. Does it last long you ask? HA! It ends March 17. That’s right, just under a month of super, fun, happy times. Oh and by “ends” it’s sort of a soft departure where the effects can linger for up to a week after. The same holds true in the beginning. My arch nemesis doesn’t just come in with a bang. She slowly creeps up on you. After the third or fourth time I think “am I the only sane person here?!” I get that deer in the headlights look—that pit in my stomach feeling—only to know that “oh no… she’s coming…”

Luckily (and I use that term loosely) Mercury Retrograde only happens 3 times a year. Her next appearance is right in time for summer. Get ready for that! …if you make it through this one.