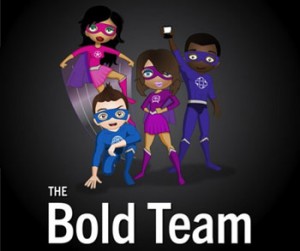 It’s a bird, it’s a plane, it’s…a team of goofy cartoon superheroes here to save RIM from disaster? Yes you read that right. In a bold new marketing strategy for BlackBerry, RIM unveiled The Bold Team. Can these four superheroes save the day for a company headed for disaster? I doubt it, but it does make for a good laugh.

Each of the four characters represents resolutions that BlackBerry customers tweeted using the #BeBold hashtag in New York this past New Year’s Eve. There’s Gogo Girl “The Achiever”, Max Stone “The Adventurer”, Justin Steele “The Advocate” and Trudy Foreal “The Authentic”. Yes, this is for real.

BlackBerry has long been known for its foot hold in the corporate market. This past year though they lost their footing in a series of bad steps. Issues with its network, a poor apology afterwards, and a lack of innovative new products have paved the way for a 75% loss of earnings this past year.

RIM did announce a new service called BlackBerry Mobile Fusion, which will let iPhone and Android devices utilize the secure network it’s been so famous for. The service is even set to launch this March. I guess RIM didn’t want to take any chances holding out that long to get people back onboard?

The only thing is, I don’t see superheroes getting the corporate customers back. Rather it looks like RIM is refocusing its attention on a younger hip generation with a love for anime characters. With Android sales skyrocketing this past year maybe RIM feels it stands a better chance signing up new youth than to regain lost market share in a corporate world?

Mobile security is becoming more and more of an issue each day.  Android may be selling well but it is just as famous for malware. RIM should just focus on what it does best—having a secure network. Make it stronger, prevent accidents from happening again.

It’s definitely a bold move. At the very least I’m impressed with RIM putting its weight behind a social media marketing campaign. Too bad the next gen BlackBerry won’t appear until later this year. But hey, superheroes always save the day at the last second…