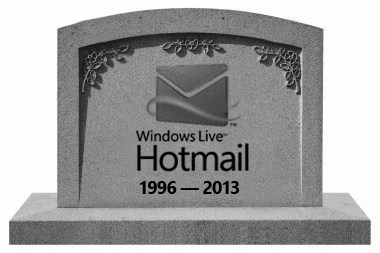 It’s the end of an era. Hotmail is no more. While news of its demise has been known for a long time now, the final nail in the coffin will be hammered in soon. By summertime this year, everyone with @hotmail.com addresses will be the proud owners of new @outlook.com identities!

Hotmail has always had a “reputation”. Back when email was in its infancy, Hotmail was the free solution for anyone to use to jump onto the email bandwagon. My first email address was a Hotmail one, way back in 1999. I still have the account to this day, but it’s always been used just for signing up for random websites that needed an email address to access. I’d never use it for official needs.

There were times I’d even make up new random accounts just to fill in the sign-up forms for sites I knew would just spam me every day. Create new email, sign up, validate, forget the account existed—out of sight, out of mind. It served its purpose, and I know I’m not alone. Just imagine how many more of those “kinds of accounts” filled Hotmail’s databases? LOTS.

Microsoft has tried a bunch of things over the years to try and professionalize it’s free email service. Adding options to have an @live.com domain, giving people Dropbox-like space in the cloud, even refreshing its interface to look more corporate. No dice. Hotmail kept its stigma. Time for a great purge!

Outlook has been used by companies all over the world for email on a daily basis for years. Lumped in with Microsoft’s Office package—a staple of the corporate world—people trust the software. That being said, they’d trust the same email domain, right?

The new cloud-based email comes complete with a new interface that offers even more facelifts than what users have seen in Hotmail. You can even get updates from contacts in your favorite social networks like Facebook, Twitter, and LinkedIn. I guess people like that sort of thing. Is that enough of a selling feature to compete with Gmail?

It could, but most companies today don’t even take a second look at emails coming from @hotmail.com, @yahoo.com, and yes even @gmail.com. Microsoft’s move to kill off the Hotmail brand is an attempt to align itself with the success of Gmail. With 425 million users today, Google is a force to be reckoned with when it comes to email service.

But since even @gmail.com addresses don’t get considered, who’s to say that anything coming from @outlook.com will do any better? I guess we’ll find out!