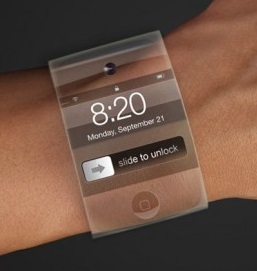 The rumor mill is hot again today with yet another rumor that an Apple iWatch is more than just whispers, it’s full on in the works. There’s at least 100 product designers working on it right now! Are you surprised by this new addition to the Apple product family? I’m not—I called it forever ago!

As soon as the 6th gen Nano appeared, photos of its watch face clock app sparked everyone to cry out “that’d make a cool watch!” Well ya! In December 2010, this dream was made a reality. The Lunatik Kickstarter project had a goal of $15,000 to make a watch strap that would house the new Nano. It got $942,578. I backed the deal before I could blink. Sure I had to wait 4 months for it, but it was worth the wait. I’ve worn it ever since.

One could argue (actually, many argued) that having to push a button to get your “watch” to light up and show you the time was silly. It never bothered me once. Don’t be haters! It was awesome to control my music right from my wrist. It saved me wasting battery power on my iPhone from listening to music all day. Having headphones strung up my arm was also never an issue for me. Bluetooth would have been nice though…

When iOS5 debuted, along came the joys of iCloud and its ability to sync files, music, pictures (and more!) between all iOS devices! How cool was that?! But the 6th gen Nano got shafted. No iCloud, no Bluetooth, just some new watch faces. When Jobs announced the upgrades he did make a shout out to Lunatik and other Nano watchstrap makers, noting the popularity of this ‘alternate use’ for his product.

I knew right then and there that Apple wouldn’t just sit by and let third party companies make accessories that changed their simple small media player into something better. And it was something better, it was a smart watch! Then along came another ground breaking Kickstarter project—the Pebble.

The Pebble was more than just a watchstrap. It’s a full on customizable smart watch. You can download new watch faces, or sports and fitness apps, and it can get notifications from your phone—iPhone or Android. The project called for $100,000. It got $10,266,845.

If that didn’t scream demand for such a product, I don’t know what would. I was not shocked when Apple then debuted the 7th gen Nano—with a different design. It was taller and thinner, “so you could play video on it better” they pitched. I knew what that meant. It was a clear slap in the face to all 3rd party Nano watchstrap makers, saying “our product won’t work with yours anymore. We’re going to make our own”. So there!

Finally hearing rumors now confirms what I’ve thought all along. Sure they’re just rumors, but 3 in one week? So many questions now. Will it come with different straps that you can interchange? Or will you have to buy separate units for a different style. Will Siri control it? What can it do?! The possibilities are endless. At this point I just really want to know one thing—when will it come out??