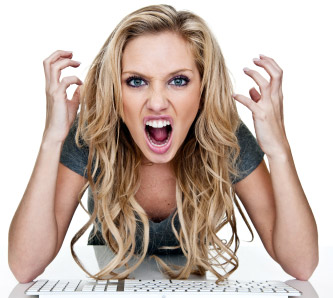 While millions of iPhone users wait ‘patiently’ for the new iOS5 software to download (2 hours? Really?), millions of BlackBerry users sit waiting for their phones to work. It’s not the only network to report outages. Sony’s PlayStation Network is also down for some. Someone tried to hack it. Again.

Outages on the BlackBerry network have been plaguing Europe, Africa and the Middle East all week. Now the issue has spread to North America. Research In Motion (RIM) says the cause is its own infrastructure. How reassuring! While fixing the issue is RIM’s top priority, 70 million people worldwide are not happy.

Joining the list of unhappiness are the 93,000 PlayStation members who got locked out from their accounts today. Not a good year for Sony! Looks like the “hack-me” bull’s eye is still in full effect. The attempted hack is under investigation, but Sony was able to report that this time around no personal data was stolen. All credit card info is safe. Users can expect an email with further info if they’ve been affected.

The angry gamers can’t even call their friends to complain because their iPhones are either updating or their BlackBerry’s don’t work. If you have a BlackBerry, you can visit this website for the latest info on the service issues. All anyone can do is wait—patiently.