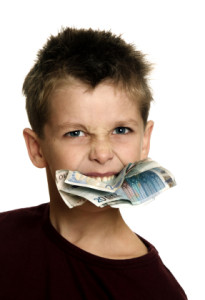 Patience is a virtue, right? Funny, it doesn’t seem that way these days. There’s a “want now, get now” mentality out there that opposes patience. Things weren’t always this way—at least in my life. Times change, and I’m just along for the ride. But what about people born into this way of life? Will they ever know patience? As my mom always said, they’ll never be doctors that way…

When I was a kid and heard a song on the radio I liked, I had to hope they said the name of it so I could either go buy the CD, or opt to listen to the radio long enough to hear it again and record it on cassette tape. Either way, I had to wait. If I liked the song that much, it required some effort on my part to get it somehow.

Nowadays if I hear a song I like, I can whip out my iPhone, Shazam it, buy it in iTunes and start listening to the song before it even finishes playing on the radio. That was easy! Music is minor, think about money!

My first big purchase was a stereo. The price tag meant it would take years of allowances and birthdays to save enough to get it. So I waited. After landing my first job it took a few pay cheques to save enough money, but I could finally claim that prize. There was no Interac at the time so after a quick trip to the bank, that stereo was mine—a year later.

The lesson learned was how much work and effort really went in to getting what I wanted. The waiting, the working. In the end I could’ve easily decided to buy something else with my money but clearly I wanted that stereo that bad.

Now thanks to credit you don’t even have to have the money to buy something you want. Buy now, pay later. I admit years later my last stereo purchase was not made the same way as my first (thanks credit!). What have I become? I love my tech, and the conveniences it brings, but it’s changed me.

I at least have the memories of patience. Kids growing up today don’t. Right out of the gate there’s technology and credit, all making their lives easy and carefree. What does that lead to? An age of entitlement. To get things without really working for it. It sounds easy because it is. If things are this easy for them now, just think where things will be 10 years from now. Be afraid. Be very afraid!