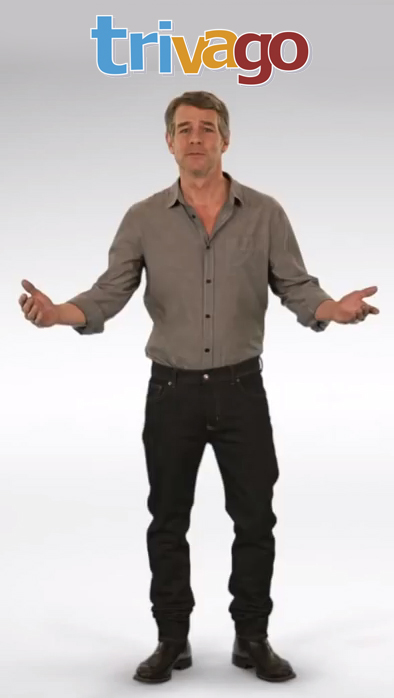 Seriously. I thought it was a joke. I really did! It was funny—at first. Oh, the silly stylist who approved the run-down beltless look for their disheveled spokesman. Ha ha. What were they thinking? But the joke didn’t end there. Oh no, it kept going, and going, and going. I don’t think I’ve seen a TV screen in the last 2 months without Joe McDumpsterdiver on it! Trivago’s crossed the line. It needs to go. Now.

Let me first start off by addressing the serious lack of style chosen for Trivago guy. Come on, this is the face of your campaign? He’s got more than a 5 o’clock shadow, a half open wrinkly shirt, and clearly hasn’t heard of a brush. Were you going for some sort of “I’ve been travelling for days with Trivago and this is me now” look? Fail.

What kind of grown man tucks in his shirt, and then doesn’t wear a belt? His pants are halfway down his ass. While some kids choose to keep that trend alive today, I don’t think they’re the market share you’re after.

Now let’s talk about how often that commercial airs. Every break?? Really? Is that really necessary? At first I figured Trivago came hand in hand with the World Cup. It made sense, World Cup = world, world = travel. Of course, Trivago! Maybe they spent their entire ad budget on airing the commercial during this major sporting event that they didn’t have any cash left over to spend on the commercial itself?

Sadly, the World Cup ended and the Trivago guy lives on. If I still had cable, I’d consider cancelling it just so I wouldn’t have to see him appear on every show’s break. It’s bad enough seeing him on all of the TVs at the gym every day. At least there’s no sound!

If the marketing department at Trivago wanted to get people talking about their company, they sure have! Social media has been on fire with hundreds of people tweeting their feedback on the creepy homeless looking spokesman. The hashtag #TrivagoGuy results in a lot of funny posts. Like these for example:

That guy from the Trivago commercials looks like the creepy single uncle that has no friends but knows EVERYTHING about women, just ask him.

Does the @Trivago guy look like he just got off a two week bender or is it just me?

I'm not booking a hotel room through Trivago until that guy combs his hair.

Trivago Guy's so gross! He looks like he just rolled out of bed & hasn't washed in like 3 days or 10 sexual partners- whichever came first.

The Trivago guy keeps his sleeves rolled up so he can find a vein easier. #TrivagoGuyFacts

Trivago guy has even enraged Canadian icon Anne Murray, so it must be bad!

Anyone else had enough of Trivago? Gawd!

Maybe any kind of attention is good attention for Trivago? Not in my books. True, they’ve put their company on the map regardless, but enough is enough. Go away already!