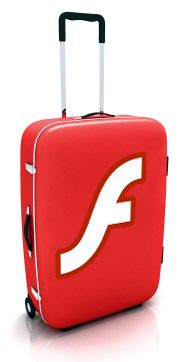 Things are not looking good for Flash. First Apple rejects it, now Microsoft is following suit. When Windows 8 launches sometime next year it will come with two versions of Internet Explorer 10. One “legacy” version which will still support plug-ins and the “Metro” version that won’t. Given that Microsoft is going full steam ahead with mobile intentions, which version do you think they’re going to focus on more? Exactly. Bye Flash!

For years Flash has been plagued with security risks and performance issues. It’s these reasons that its has been excluded from appearing on any iOS devices since the first iPhone. While this has angered iOS users, it hasn’t been enough to make any sort of impact on Apple’s sales. Remember last year when Steve Jobs posted his “Thoughts on Flash”? HTML5 is the way of the future .

As the world goes mobile one of the biggest issues facing the devices is their battery life. If you can’t be on the go for long periods of time without charging your phone or tablet, then there’s a problem.

Flash is a resource hog. To get it to work in mobile Safari would lower your battery life—a LOT. Is that something you’d want to trade in just to play that Flash game you like in a browser? The very same game you can probably download for free from the App Store?

All hope is not lost for Adobe. They did recently release Flash Media Server 4.5 which finally allows media publishers to deliver their content to iOS devices. Flash content gets converted on the fly to HTML5 – the format that iOS devices like. While this won’t let you play those Flash games you like so much, those who want their videos seen on all devices can opt for this software to make it happen.

It’s a small victory, but not a life saver for Adobe. What do you think? Should Adobe just throw in the towel and admit defeat?