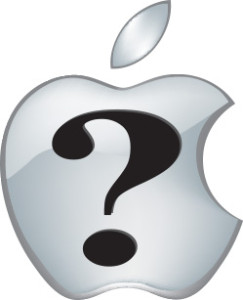 It’s no secret I’m a devout Apple fan boy. I love my iOS devices and share unliked opinions about BlackBerry and Android. As the mobile madness wars still heat up, my question is—what the frack is Apple doing?

When it comes to smartphones, BlackBerry died long ago (good luck with the new iPhonesque Z10 ) and Android is as synonymous with malware as Ben is with Glory (if you’ve watched Buffy you’ll know what that means—trust me, it means ‘the same’).

With Steve at the reigns, I knew what to expect from Apple. A press event to preview the new iOS, then another months later to preview the new iPhone. Launch day is a couple weeks later—complete with long lines and wait times. Then after all that excitement, it’s back to business as usual once you finally get your hands on the new model. But you have it!

In Jobs’ era, his products were on a yearly schedule with *somewhat* regular release dates. People longed for the next release. Those who could snag the new device right away got bragging rights over owners of older versions. A status symbol you say? Perhaps. Oh that’s just a 4? Ya, mine’s a 4S… well, now it a 5. Obviously.

Since Steve Jobs left us, I’ve been wondering what would become of Apple. Now I know. If you can’t beat them, join them! How do you compete with Google? Flood the market too. Not just iPhones either, but with all iOS products.

An Achilles heel in Apple’s strategy opened up due to cell phone contracts and Job’s yearly release schedule though. In the few months before a new model was to launch, people looking to switch to an iPhone would just sit and wait. Why buy a 4S when a 5 is right around the corner? Those few months could lead to impatience, with angry people renewing their current contracts or going with other competition. It also means no sales for Apple during that wait time.

When the iPad 3 (sorry, the New iPad) was released, the iPad 2 didn’t go anywhere. It just got cheaper. People could choose to get the latest and greatest if they could fork out the dough, or settle for the cheaper iPad. It’s still an iPad, right? Then what happened? 6 months later my New iPad wasn’t new. There was a new New iPad—the iPad 4. WTF?!

The iPad mini was released just in time for Xmas. It was smaller, but it had the iPad2’s screen. It wasn’t retina. It was inferior. Sandwiched between an iPhone 5 and an iPad 3/4—both with Retina displays—why release a product that’s smaller, but has the old skool screen? Steve would never have done that (or release Apple maps the way it was either, btw). But a product for the holidays meant “just get something out there”, and that they did. Just wait until this spring. A mini HD will be out for sure, complete with the Retina screen it should’ve had all along. Good luck selling your old one. Regift?

Android sales skyrocket because the devices are cheap(er than iPhones), and there’re a lot of different models/brands. If Apple continues to saturate the market with its devices, it will only cheapen the brand. Every action has a consequence. What’s better, quality or quantity? Looks like the latter these days. It’s madness!