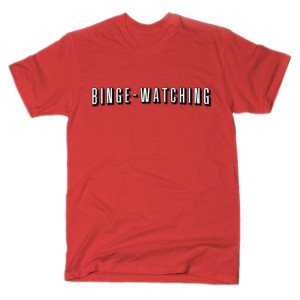 “Just one more episode, I swear!”

TV as we know it, is over. The formula that worked for years, works no more. The same way MP3s “killed” the music industry, modern technology, high speed internet, and companies like Netflix have “killed” TV. Now we binge!

I gave up on TV a long time ago. Ditched my cable, stopped being a slave to the “sometimes new, sometimes repeat” weekly schedule that so many shows still go by. Honestly, repeats are the most useless concept ever, and then finally airing a new episode on a “special night” or “special time”? Are they trying to shake their viewers?

The whole point of TV shows is to entertain. Each episode aims to take us away from our lives so we can be amused by the lives of other made up people (reality shows included). Sitting down to watch a half-hour sitcom or hour-long drama once a week doesn’t do it for me anymore. I barely have time to get comfy and the show’s over. My brain didn’t system dump all the crap from my day, it’s still all floating around up there. That was pointless.

Enter box sets on DVD and BluRay, torrent sites, and Netflix. Now instead of waiting for more (no one likes waiting), entire seasons are at my mercy—right now! I can pick and choose when I watch, and how much I watch. One a night? Three? Five—what’s one less hour of sleep? Maybe I’ll shut myself in for the weekend, knock back a whole season or two?

On the plus side, binge watching lets you really free your mind—to fully escape and engage with the show, its story, and its characters. For shows like Lost with their full season/series story arcs and a crazy complex plots were easier to follow when I could watch a few in a row. Seeing an episode once a week was nerve wracking, and I’d forget a lot from the one before (despite a “previously on Lost” recap at the start).

Why not drop the whole season all at once? It lets people choose their own schedule. When Netflix revived Arrested Development for a fourth season, that’s how they did it. True many pulled an all-nighter to watch it all at once. Hours of laughs can’t be a bad thing!

Some drawbacks, it’s very easy to get too immersed in a show’s reality. You start to forget about your own—like your job, eating and sleeping habits, general hygiene, bowel movements? Those are important too! This sketch pokes fun at this new craze. While a bit overblown, as a Battlestar Galactica fan it’s a little too similar to when I first started watching the show—at least the first season.