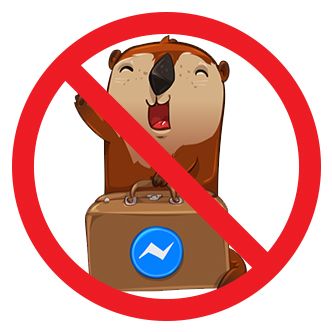 The one thing social media is good for is spreading info like wildfire—whether it’s true or not. The latest scare to hit the web is over Facebook Messenger. From now on if you want to get Facebook messages on your phone, you need a separate app. That’s not the bad news. It’s the Terms and Service that are freaking people out. Is Facebook Messenger really as bad as everyone thinks?

No one really reads the Terms of Service. We all just click right through to get on with installing the program or app. Who has time to read all that crap anyways? Surprise! Someone did and they found some oddly worded parts. Now it’s all chicken little, the sky is falling, Facebook is evil, and everyone is boycotting the app.

Creepy, right? No wonder people are getting all bent out of shape. Conspiracy! Privacy violation! Um, no. Do you know why it’s worded this way? Android. Google Android. Yes I know I always blame Android for everything, but this time it’s true! The wording is such to appease Google’s “rigid policy on permissions” on Android and has to use “generic language provided by Android”. The terms “malicious apps” and “Android” go hand in hand. Not on iOS!

Do I love that Facebook decided to move away from the “one app to rule them all” model and split its app in two? No. It’s annoying to use two apps, but they link back and forth easily so it’s not that big of a deal.

For a company that makes as much money as it does, Facebook should be able to pool together the resources needed to code one app for all features. The act of splitting them and making it mandatory to install the second app is only adding fuel to the whole conspiracy theory flooding the interwebs.

So why split then? Ads, silly! Facebook wants more granular info on you to serve you more tailored ads. Our behavior on Facebook of posting pics, liking pages, and commenting on statuses is completely different than what we do and say through our chats.

Think about it. People post things on Facebook that are (usually) intended for a wide audience. In chats, subject matter is much more private. Separating the two allows for different algorithms for each to farm the subject matter and thus show you more relevant ads—for you.

See, It’s all about you. If someone shone a light onto the Terms of Service of other apps you use, you’d freak out about those too. Chances are you’ve already agreed to all of the same things Facebook Messenger asks for, just with other apps. If you’re still all concerned, just block permissions for the features you don’t want Messenger to access. Done!

In the end, should you boycott Facebook messenger? I’m saying no. Now don’t shoot me either.