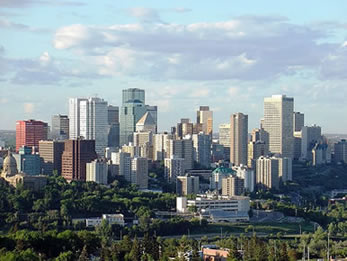 After all the success the viral video on “how to be a Vancouverite” has had, I think it’s time time to expand the series with other major Canadian cities. After being born and raised in Edmonton, I vote the next in line should be “How to be an Edmontonian”, and it should go something like this:

Step 2: Get used to this: “It’s snowing?! OMG it’s snowing! Have you seen how much snow is out there? It’s how cold? -40°C plus windchill? That’s it, I’m staying in bed.” —and this— “Construction?! I hate construction. Jasper Ave is only one lane for how long?? They did what to Kingsway Ave? Will the ring road ever be finished?! Why does the train always have to cross 170th during rush hour?? Why don’t they just fix these potholes?!”

Step 4: Have a love/hate relationship with West Edmonton Mall: “Hey, wanna go to West Ed? Ew, I hate West Ed. Who goes there? I just have to pick up a few things at West Ed, wanna come with me? Of course there’ll be parking. What? There’s no parking?! I hate this place!”

Step 5: Own a truck. A really big truck. The roads are wide enough, why not? …wait, something’s missing—oh right—wide tires!

Step 6: Complain about traffic and transit: “What’s with this traffic? Does anyone in this city know how to drive? The Anthony Henday sucks! How is this convenient? That’s it, I’m taking the bus! Where’s the bus?! I’ve been waiting here forever. What do you mean the bus doesn’t go there? OMG the bus sucks. Are they ever going to make the LRT go to West Ed? It’s 20 years overdue. Sure they can build it, but not in my backyard!”

Step 7: Have an opinion about the new hockey arena: “They’re going to build it! No they’re not. Yes they are! …No they’re not. Build it, but not with my tax dollars! It’ll boost downtown business! Oh whatever, Rexall Place is fine—the Oilers aren’t making use of it anyways. Go Oilers!”

Step 8: Know your festivals: “Hey wanna go to the Fringe? Let’s go to The Taste of Edmonton! It’s Heritage Days! Um, what? You’re not going to Folk Fest?? What are you, stupid? It’s the Folk Fest!”

Step 9: Always call the Exposition “K-Days”, no matter if they call it Klondike Days, The Capital-EX or now just K-Days (because you don’t know where that came from). Just get drunk, eat corn dogs and churros, and maybe go on a ride or two. It’s no Stampede, but it is what it is.

Step 10: …and finally, to become an Edmontonian, no matter how much you complain about it being “Deadmonton”, you’ll never leave!

To see the original, check it out here: