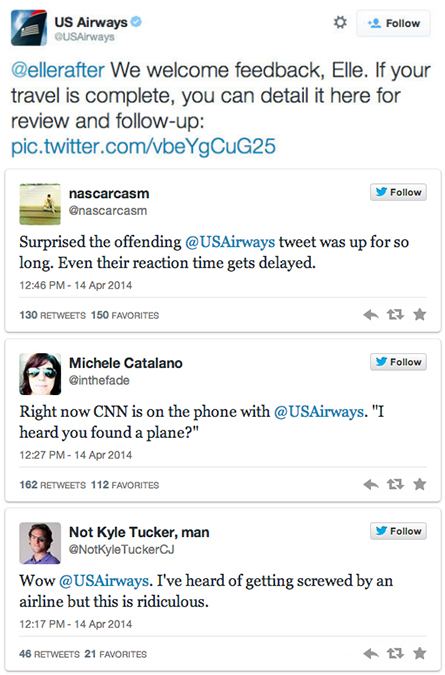 What started off as a routine customer complaint via tweet, turned into the greatest “oops” in the history of Twitter. How do you respond to a passenger angry about ignored tweets? By saying you value their feedback and tell them where to send it, linking them to a NSFW image of a woman having sex with a toy airplane, of course.

It sounds too good to be true, but to US Airways the reality is all too real. While the NSFW image pretty much implied “you can take your feedback and shove it—(well, you get the point),” it was just a mistake. An honest mistake, a copy & paste mishaps. Blame it on the clipboard!

Turns out the NSFW image had been tweeted to US Airways in the morning. Like any good “Social Media Ninja,” they copied the image’s link to report it. Fast forward ahead, when the time came to send an angry passenger a link for them to give feedback on their flight’s delay. The NSFW image’s link was still on the clipboard. It got pasted instead. Oops!

To make matters worse, the tweet stayed up online for over an hour before getting removed.  A lot can happen in an hour, especially when you’ve got a viral content gem like this on your hands! The image spread through Twitter like wildfire. Despite the photo’s NSFW label, I’m sure a lot of people saw it at work.  I’m not going to post the image. Google that shit, trust me you’ll find it.

I’d be lying if I said this has never happened to me before. It has, though not with NSFW photos or millions of views. I used to use Hootsuite to manage all of my social channels, and that meant both personal and work Twitter accounts. Once (fine, twice) I sent a tweet meant for my personal account, but did so from the company’s handle. Yup, oops.

Both times I caught it right away, deleting the tweets before badness ensued. It could have been worse though. Luckily Faronics didn’t have many followers. I knew for sure literally no one would have seen them.

US Airways, not so lucky. Many saw the tweet, and many had highly amusing retorts. Check out this post on Mashable for some of the best tweets! (This is why I love the internet)

When it comes to social media management, oopses are bound to happen. As careful as you are, shit happens. If it does, I say use it to your advantage. Apologize sure, but laugh at yourself, put some spin on it, and turn the oops into opportunity. You’re in the limelight, may as well make the most of the free publicity. If US Airways needs any help thinking of clever comebacks, the internet is filled with ideas at the moment!